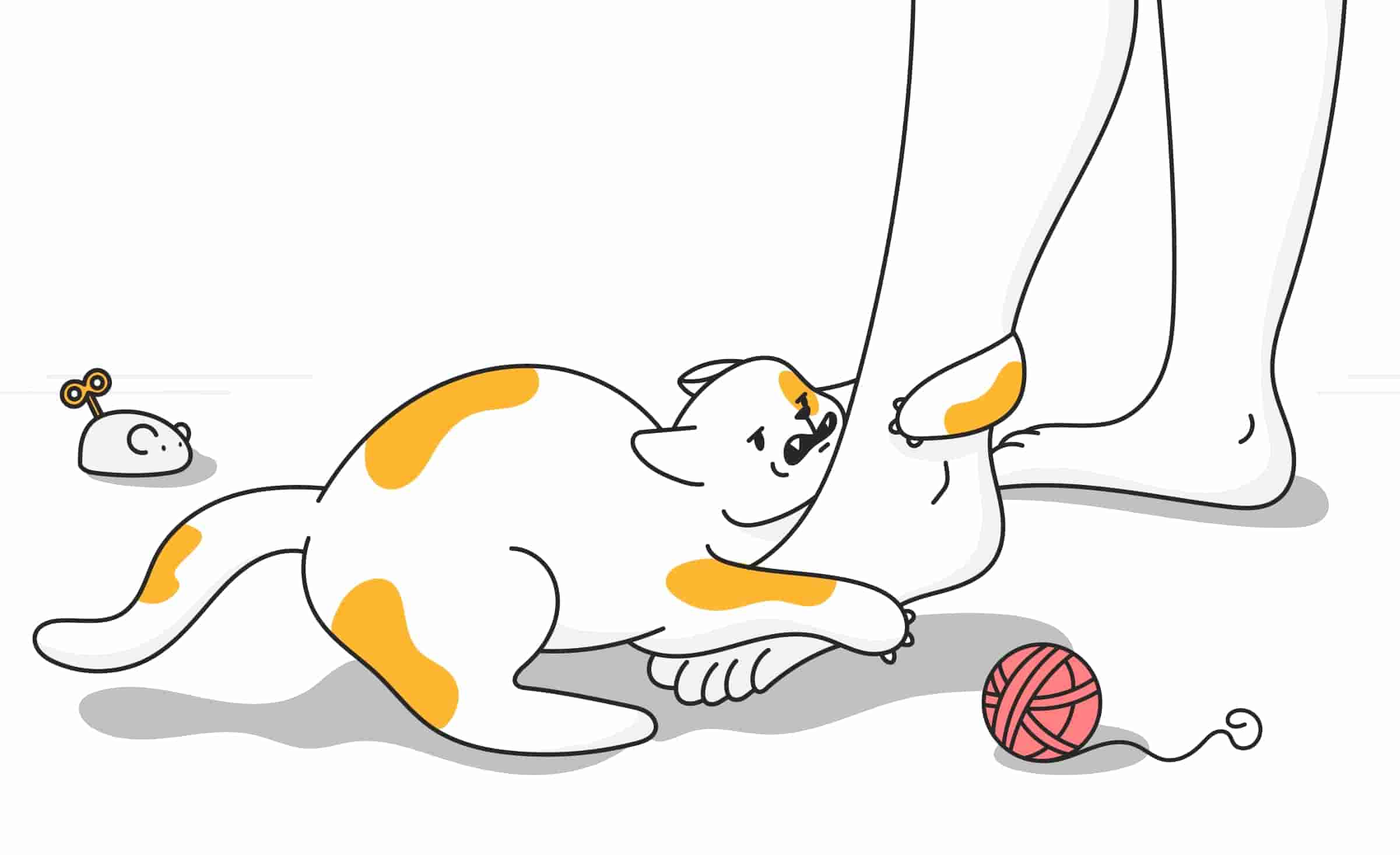 Why Does My Cat Stalk and Pounce on Me?

Cat parents are all too familiar with the behavior of cat pouncing. When a cat slowly stalks and creeps towards their object of desire, then when they're ready, they pounce! Oftentimes, it's pretty funny to observe, save for the occasions when the object that they choose to pounce on is … you. While it's a common sight to see a cat pounce or stalk, you might be wondering why do they do it, and we are willing to answer this question.

Cat stalking and pouncing in nature

The predatory behaviors of cat stalking and pouncing begin in a cat's early years. Kittens can already master the art of pouncing in a little over two months. Whether in their early years or as adults, felines are consistent in how they do it by following a particular order of movements, just like a dance. 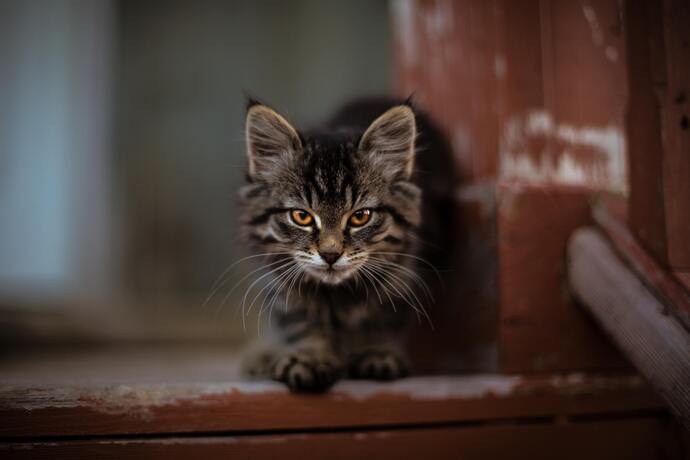 The first order of business is stalking. First, cats settle into their positions while they prepare their back legs. They would then focus stare on the object of their desire. At this point, cats will begin to wiggle their butts (while adjusting their legs), which is actually an essential precursor for them to leap forward impressively.

Stalking is crucial in the art of cat pouncing because it allows felines to carefully observe their targets and adjust the energy they need to exert to have a good pounce. If the target is large, it would call for more intense wiggling and adjusting to gain balance and energy to have a good landing right before they pounce. 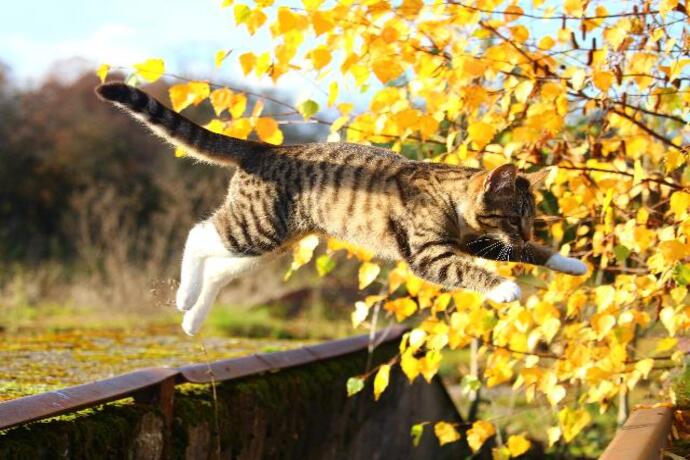 If you see your kitty stalking and leaping forward, it's a surefire sign that your cat is about to pounce in no time. They exert the most energy in this step, as they have already stalked, positioned, and strategically adjusted to give their all as they pounce towards a target. It doesn't end there. After the pounce, cats would usually bop and toss their target around.

In the wild, they do this because they want to kill the target as quickly as they can (with the least effort) to make sure that the target is in the proper position for them to bite the neck easily.

In the domestic setting, they still go through the same steps even though they know that the target isn't alive, and they enjoy this process nevertheless. It explains why giving them a mouse toy is loads of fun for them. They would stalk, pounce, and toss it around as if it was a real mouse.

Why do cats pounce and stalk at home?

Even though most reasons behind pouncing and stalking are inherent, this behavior in domestic cats can be also explained by anxiety or agitation. So, what are the reasons for your kitty stalking you and hunting your legs?

It's in their nature 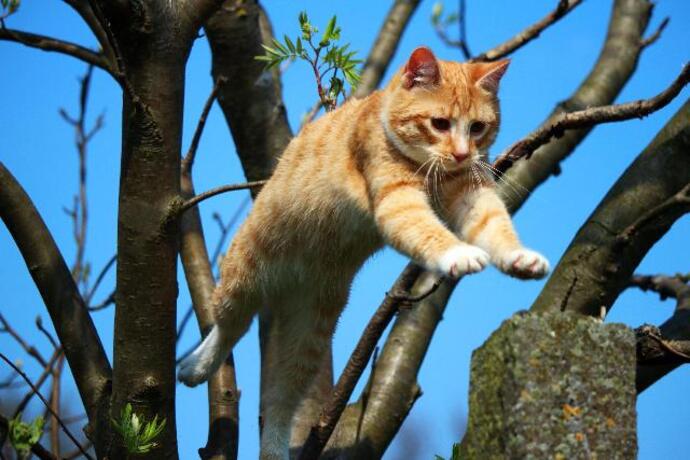 Domestic cats don't need to hunt for food because their pawrents feed them, but why do they still exhibit behaviors like cat stalking and pouncing as if they are hunting for prey?

This behavior is actually rooted in the fact that our cats are natural hunters, having descended from cats in the wild who would hunt for their prey by stalking and pouncing. Yes, domestic cats may not be in it to hunt for food, but they stalk and pounce just because it is in their nature to do so.

They want to play

Another possible reason why cats pounce is that they just want to play. A typical scenario is when your pouncing cat would hide from you under a piece of furniture and instantly jump on you. Apart from this, they may also tap you with their paws or lightly bite you.

Play aggression in cats, however, may also be possible. For example, cats might dig their claws on your skin, or they might bite or kick you hard. Note that this is normal for cats, and hurting you may not be their intention, especially since their body is not the same as ours.

While we humans have thin skin and generally thin hair covering our bodies, cats have loose skin covered with thick fur. On the other hand, some cats may like the attention when you react to their pouncing or simply because they're enjoying it.

It may be due to agitation or anxiety 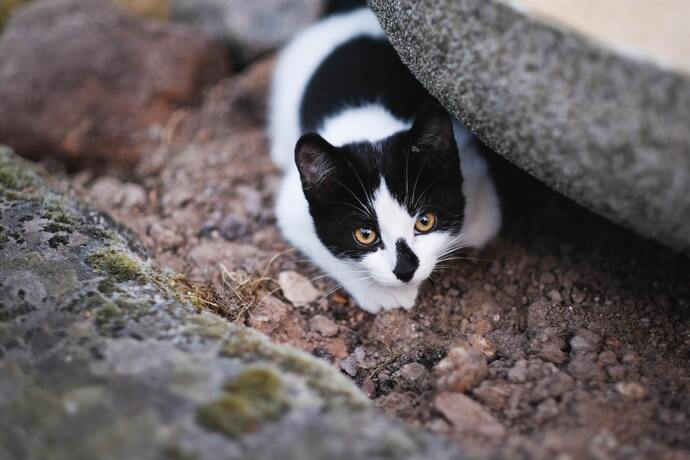 A cat may also exhibit stalking and pouncing behaviors when they are agitated or anxious. More often than not, it is likely to be triggered by the environment they're in. For example, if there is a sudden loud noise such as vacuum cleaners, a cat might feel stressed and use pouncing as an outlet for their agitation.

Another example is when there is a new pet in the house. If you brought home a kitten, you should know the rules of introducing cats to make them get along. At first, your cat would probably feel stressed and may show predatory behaviors to express this.

Knowing that cats have natural predatory behaviors such as stalking and pouncing, directing these behaviors in healthy ways would prove beneficial.

Cats have short but frequent predatory patterns. By mimicking these patterns when it comes to playtime with your cat, they (and you too, of course) will indeed have a lot of fun.

If your cat feels a lack of attention and thus resorts to stalking and pouncing, increasing playtime will help them redirect this energy while bonding with you at the same time. It's best to select toys that mimic their natural prey, such as a mouse toy or a feather wand.

For cats with more aggressive pouncing behaviors, think of alternatives that would provide them with more physical and mental stimulation. For example, when your cat is in the process of stalking and is about to pounce on you or any other object, you can distract them by using interactive toys, like laser pointers.

Modern pet parents can try game apps for cats to entertain their kitties. If you have to spend too much time away from your cat, you can use an interactive pet camera with a laser toy to keep your cat active while you are at work or traveling.

It is often amusing for cat lovers to witness cats stalking and pouncing, butt wiggle and all. However, if your cat’s pouncing activities are causing injuries, it might be a good idea to consult with an animal behaviorist to determine ways to redirect this behavior.

Can Cats Eat Meat Like Chicken, Pork, and Beef? 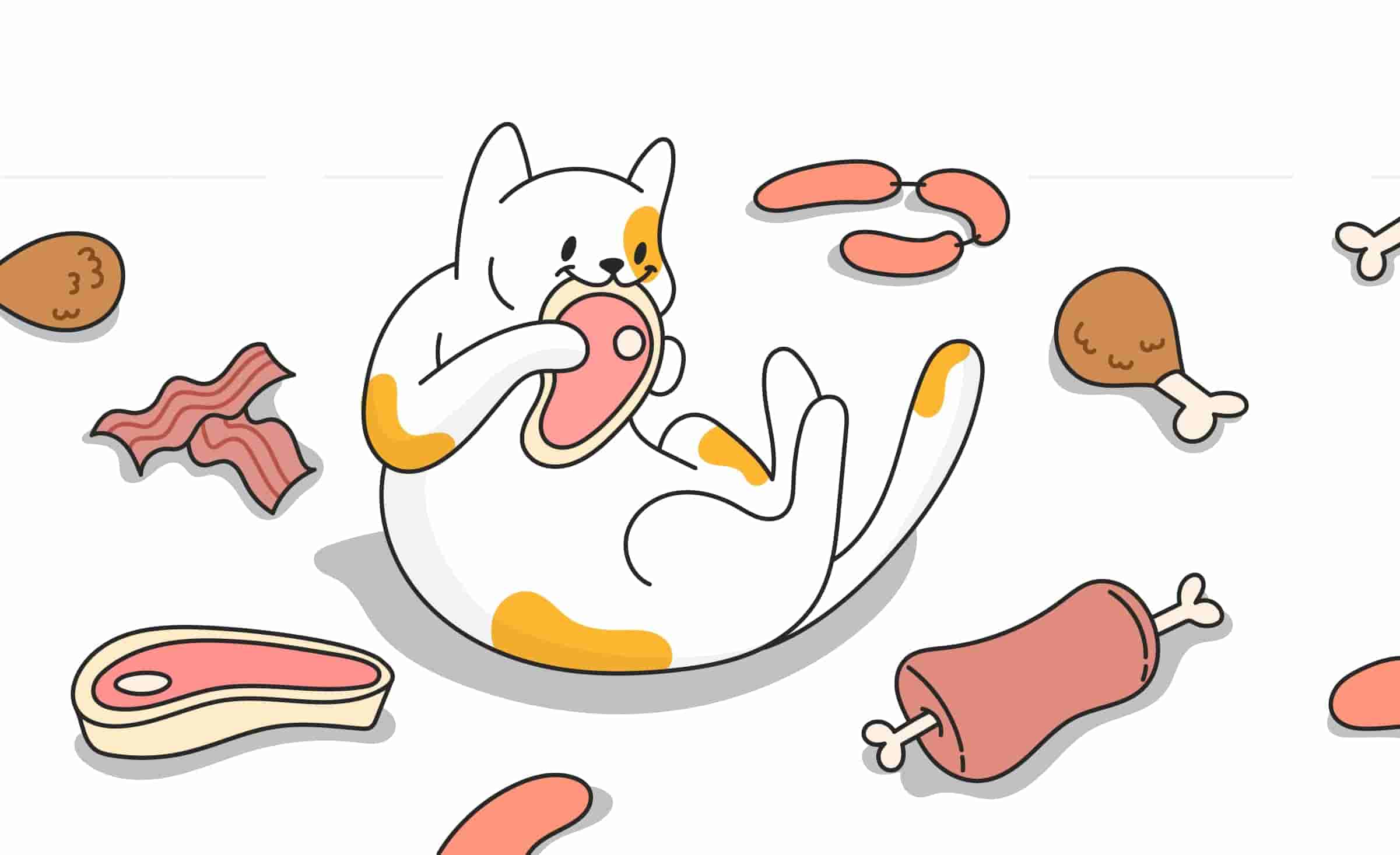 Why is My Dog Shaking, Shivering, or Trembling 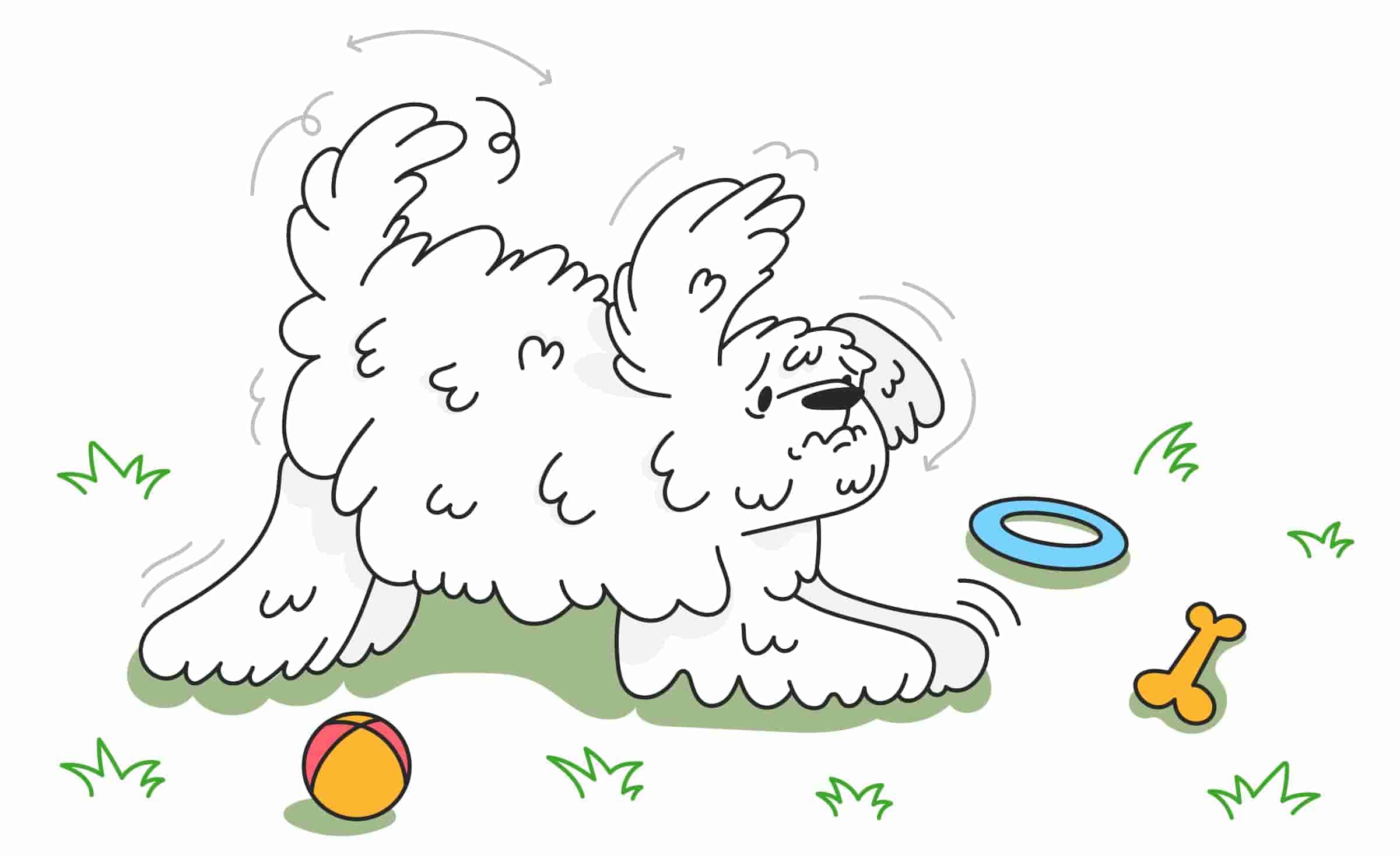