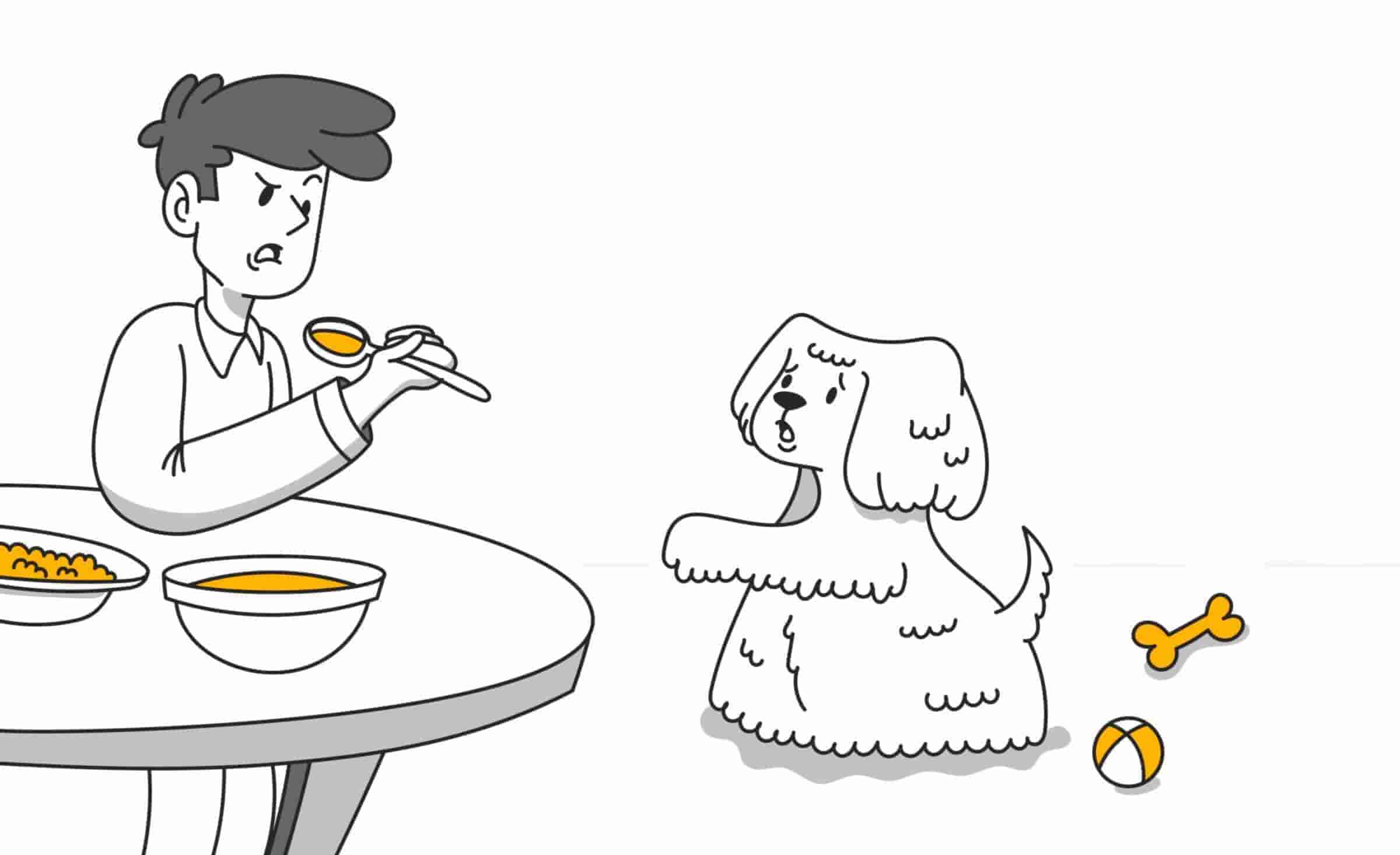 Why Do Dogs Beg for Food and How Can You Stop It? 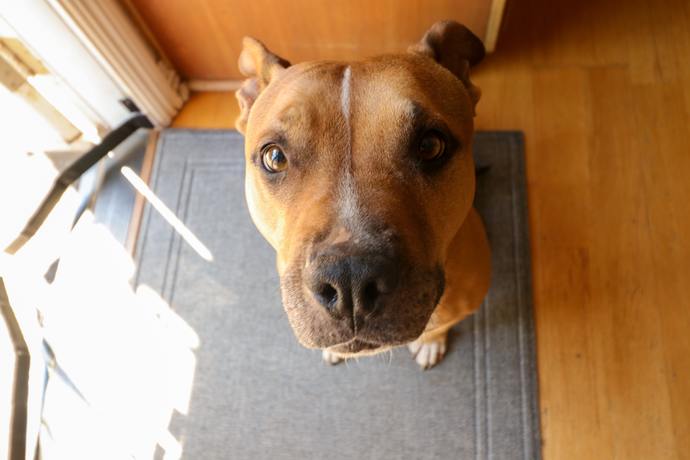 Dog begging for food is one of those behaviors every pet owner faced at least once. It is one of the most common discipline issues, which can be quite hard to overcome. Your pup’s adorable little face begging for some extra snacks is enough to break down even the staunchest person’s resolve.

If your pup is an “entertaining beggar” and has become a star at the dinner table, it’s crucial to understand why canines behave like this and do your best to stop it.

Why dogs beg for food

So, why do dogs beg while you’re eating? Is it just because the food is so yummy and tasty? Well, yes, but not exactly. It seems a rudimentary, even a primal response, but this behavior’s actual origin is anything but simple. Dogs have spent a lot of the last 10,000 years co-evolving with humans.

As a result, they’ve learned tips on how to interact and be treated. Pups do that begging thing because they understood that it gets them what they want: food. To put it simply, your dog begging for an extra meal isn’t weird but rather an instinctive action. Canines are scavengers by nature, and since they were domesticated, we have inadvertently encouraged this behavior.

They also know they will get something to eat when they beg, making those puppy eyes a simple way of getting some snacks. That’s why they will continue to beg even after they are full. 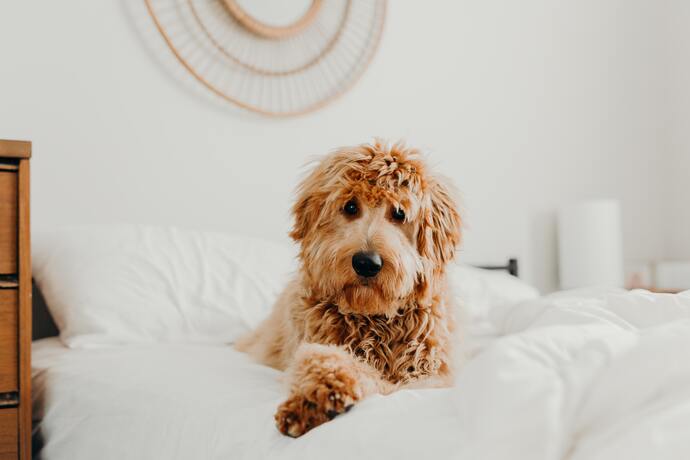 Your pup just finished the dinner, then calmly walks to your plate and asks for some more? It’s common to ask yourself a question of why is my dog always hungry? You should understand that such actions have far-reaching roots. Now, your pup may be content in his nice home with plenty of balanced meals to consume. But that wasn’t always the case.

Canines haven’t always been around, living in comfortable conditions and enjoying delicious treats. For dogs, it was feast or famine. When food was available, they would consume it in large amounts to keep their bodies warm and fight off cold weather ravages. If access to nutrition was scarce, they would become scavengers, living off anything they could reach.

Now when you see a pup stealing table scraps or begging for an additional snack or two, you can recognize the origins of such behavior. The link might be unobvious, but it is no wonder that a hungry dog reaches food whenever it’s possible. A clear evolutionary response is that pups tend to eat even after they’re full to get fed before potential scarcity occurs. What happens next, especially among domestic dogs? You got it right, overeating and obesity.

What happens when you give in

Dog begging can happen because your pup has learned that they can manipulate you into giving a food treat as a reward at certain times. When you give in to your dog's begging, it reinforces the behavior.

Your dog quickly learns that if they beg long enough, you’ll eventually give in out of stress or frustration. By giving in, you’ve taught your pup that such an approach clearly works, that’s why learning how to stop a dog from begging is crucial.

How to get a dog to stop begging

Get ready, it might be unpleasant to hear. We bear the responsibility for incentivizing dogs begging in the first place. Ouch! It’s no surprise that our dogs keep on begging precisely because of knowing that we will fall into such a trap. We all know how hard it might be to resist those cute puppy eyes.

It could be uncomfortable to say “no” at first, and you might even feel guilty. But it would be foolish to expect perfect behavior if you are not taking any actions. If you have a begging dog, don’t waste any more time and prevent it with a few simple rules.

This rule is simple but should be restated once again: don’t fall into the begging thing trap. It only seems that being indifferent is somewhat rude, but it’s the best way to discourage this behavior. You must be consistent and follow through with the rules that you set if you want your dog to stop begging.

Your pooch is indeed fed and not starving, so those sad eyes shouldn’t mislead or confuse you. And don’t forget that all those table scraps lead to increased food intake, which negatively affects your pup’s physical well-being. Don’t make any eye contact, and never call your dog if you are just about to have dinner.

Don’t allow your dog under the table while you eat

If your pup is under the table when you eat, sthey will begin to associate your mealtimes with begging. That means your dog will continue to beg for food if you don’t share scraps during your meals.

The best solution is not to allow them under the table while you eat. It can be done by either clearing all dishes and food away from the table or making sure your dog is out of the room.

Start by teaching the basic commands, such as “sit,” “down,” “drop it,” and “leave it.” Even if it takes time to make a habit, you’ll be greatly rewarded in the end. Slowly transition into using these commands to discourage your pup’s impulsive actions.

Use these essential commands when your pup is begging for food after already having their dinner. Just tell your dog “sit” or “down” to stop this behavior. As with any other training, changes don’t happen overnight. Even after your dog went through obedience training, make no exceptions when it comes to food begging. Remind yourself that consistency is key here.

Mind your own actions

Pups are curious animals, and it’s no surprise their ever-sniffing noses can reach almost every counter. Don’t leave any food unsupervised or leave open access to your kitchen’s table. You can’t blame your pooch for their instinctive curiosity and desire to get some extra snacks. Make sure to take all food from easy-to-climb surfaces, especially if you have a larger pup.

Don't forget about exercise and toys 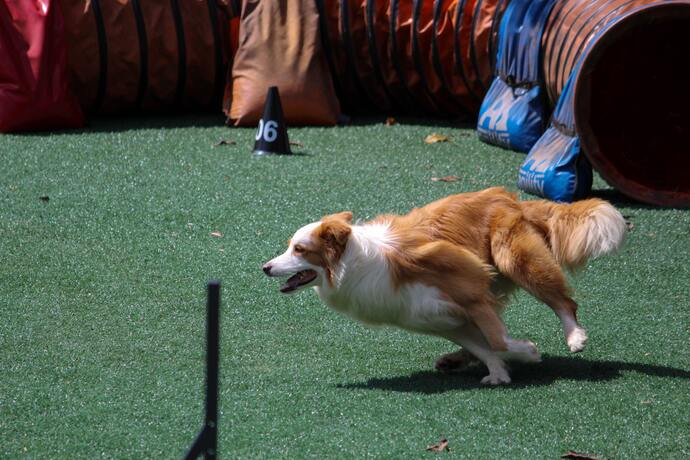 If you have wondered how to stop your dog from begging and redirect all this energy to something better, physical activity should be a part of your daily routine! Even though it won’t solve a begging problem immediately, giving your pup plenty of exercise every day will ensure that they get more than enough stimulation to satiate their physical needs.

Another step you can take is to make sure that your dog has some toys or puzzles. It gives an outlet for their desire to gnaw on something and keeps them from asking you for food when you sit down for a meal. Toys also work as an excellent distraction for pups, so you should certainly try using them.

Punishment is useless in this case because your dog will only get more stubborn if you punish them for something they enjoy doing. If you need to stop them from begging, never yell at them or push them away when they beg for food.

Instead, let them beg and completely ignore them until they’ve given up and decided to leave the room (this will take about a minute or two). Then get up and feed them their dinner. In time, they will associate begging with getting fed on their own without distracting you. It is precisely a thing you want to achieve! You may have to repeat this trick several times before your dog gets the idea.

Remember about obedience training? You can expand it even further, and not solely by redirecting your pup’s attention while eating. After teaching the basic commands, don’t forget to tell your dogs they’re good boys and girls after each successful attempt. If you’re using training treats, give them to build positive associations.

You might apply this technique smartly by gradually removing treats. Instead, use verbal commands, praise, or a favorite toy to support your pup’s good behavior. When your dog begs for food while you surely know they’re well-fed, reinforce the learned pattern. Track your pup’s reactions over time, but constant training surely helps to mitigate impulsive begging behaviors.

Expecting changes to arrive overnight is a bit ambitious. Being consistent and somewhat stubborn is a key to bringing a positive difference to your pup’s behavior. If your dog keeps begging for food, don’t give her a snack as a so-called “exception.”

Once you manage to overcome the guilt and maintain consistent rules, sooner or later you will stop your dog from begging. We bet your pup will get more disciplined once you follow our tips to stop food begging.

5 Ways to Celebrate Valentine’s Day With Your Pet 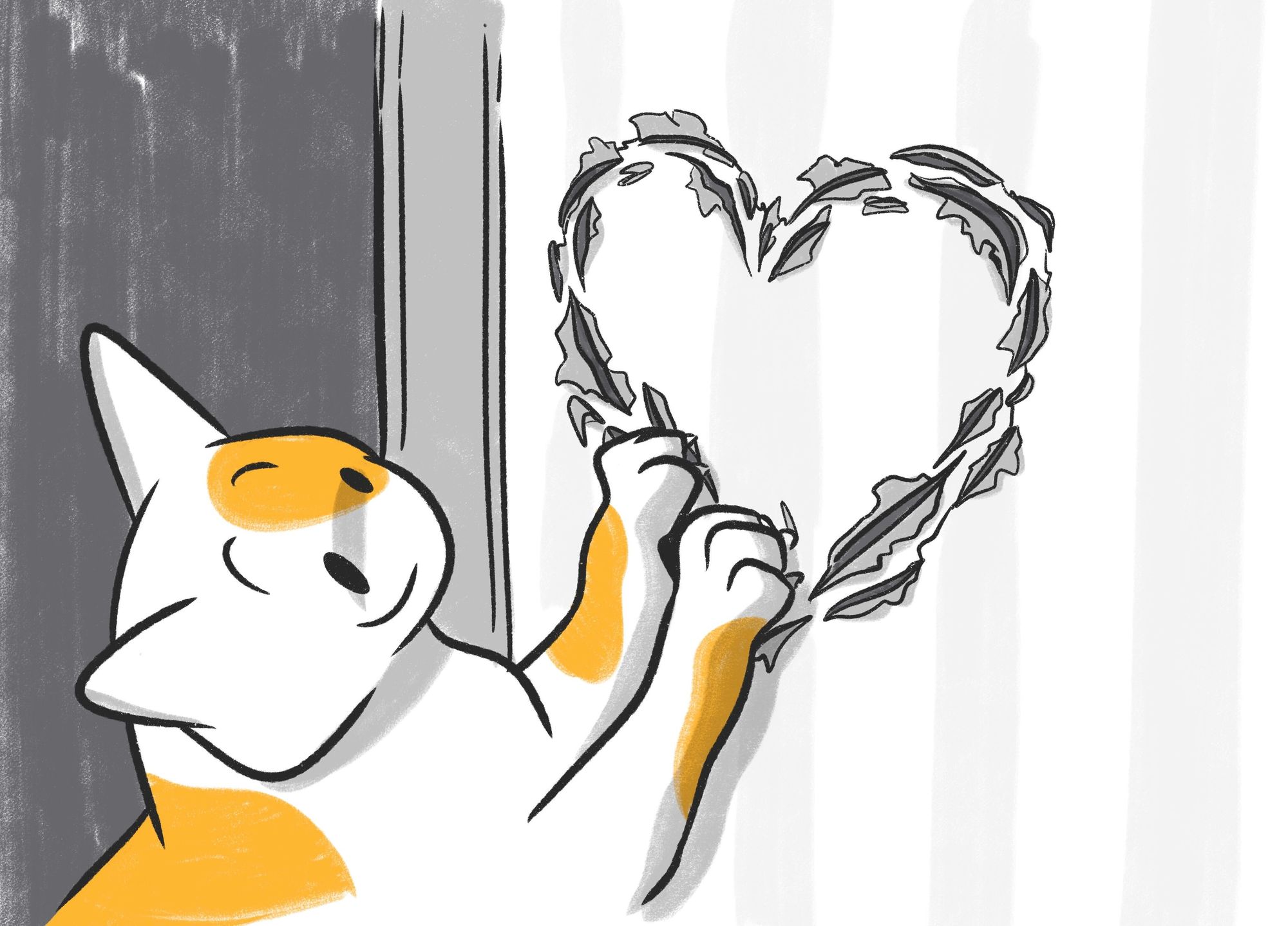 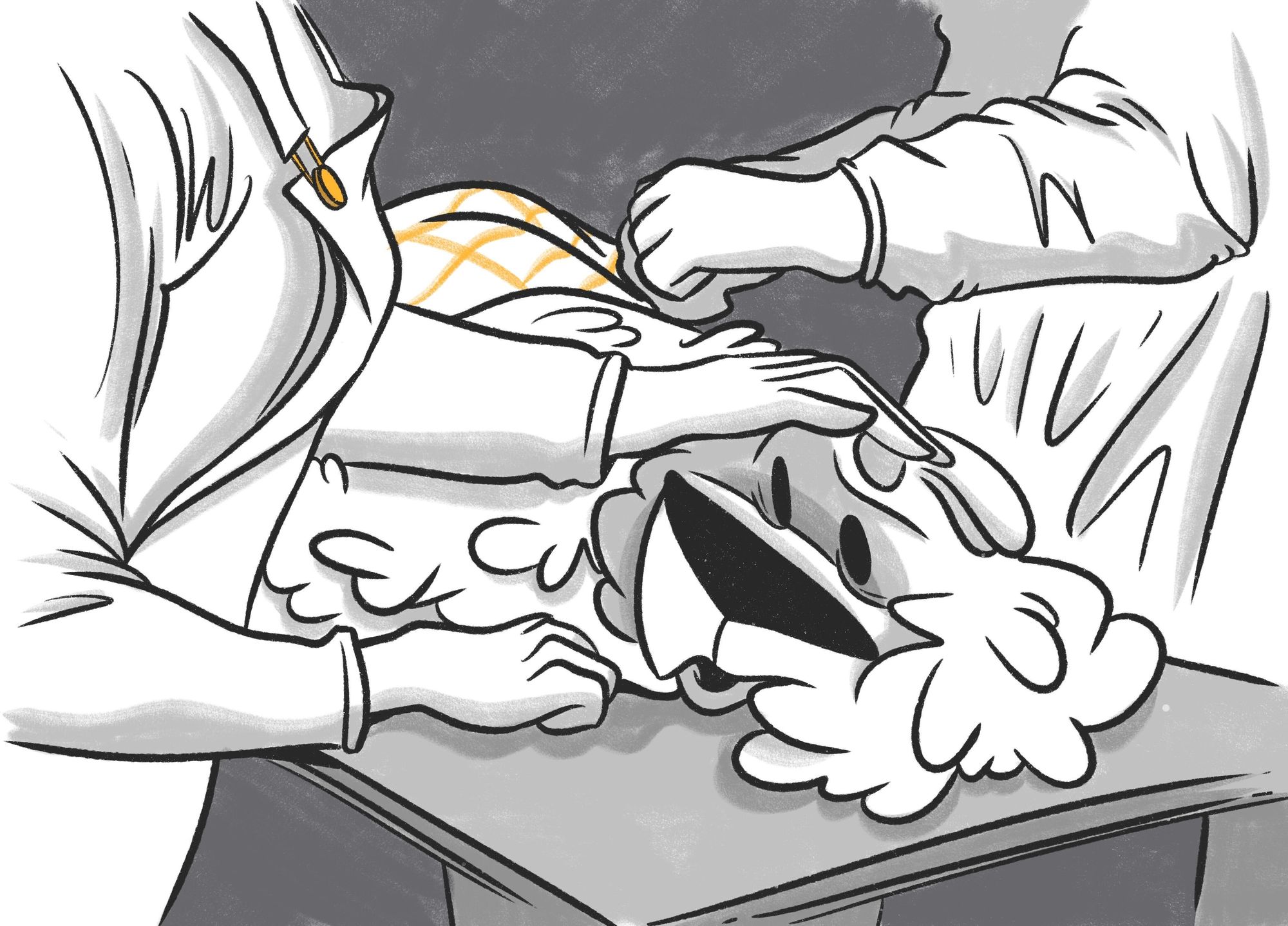 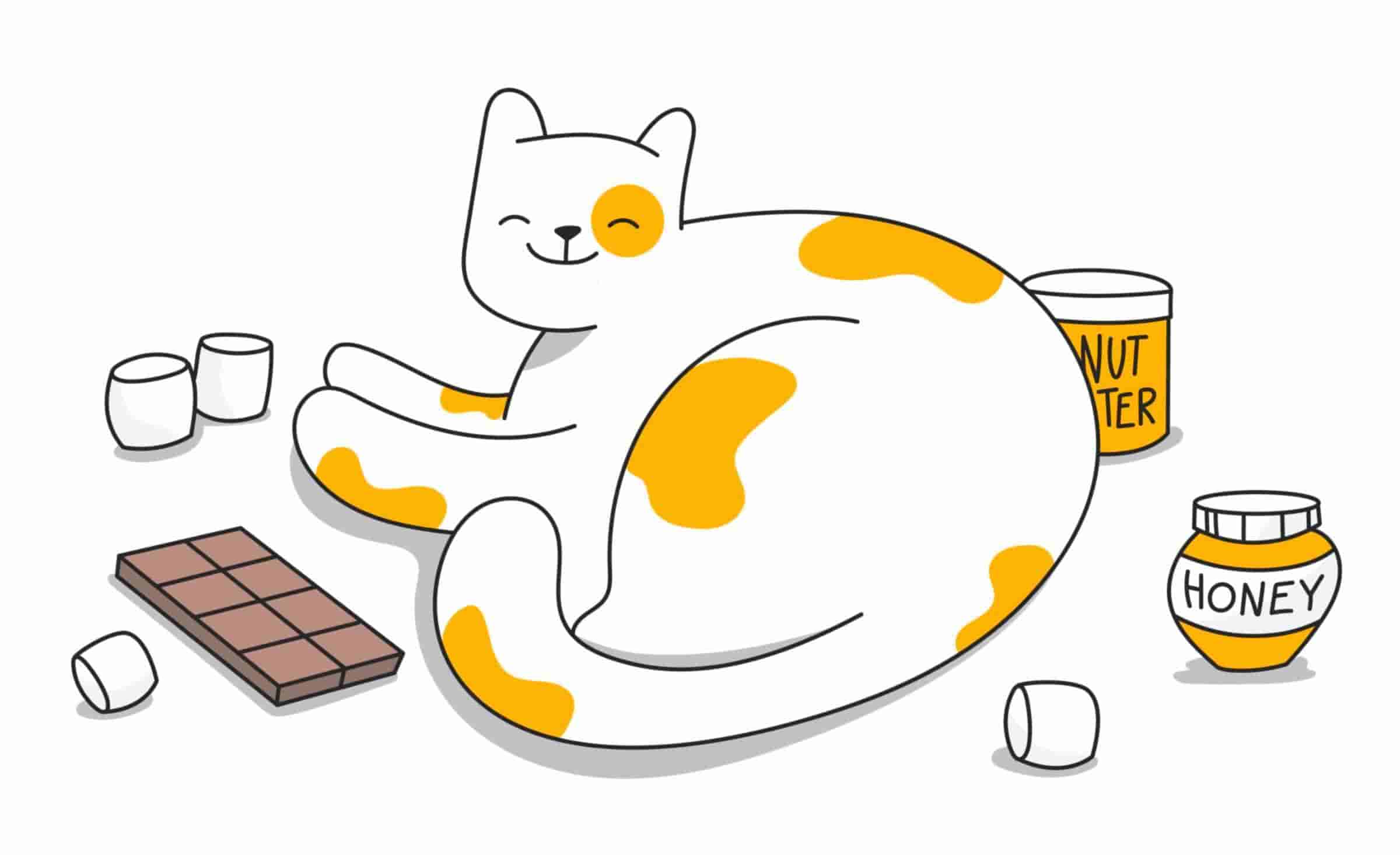 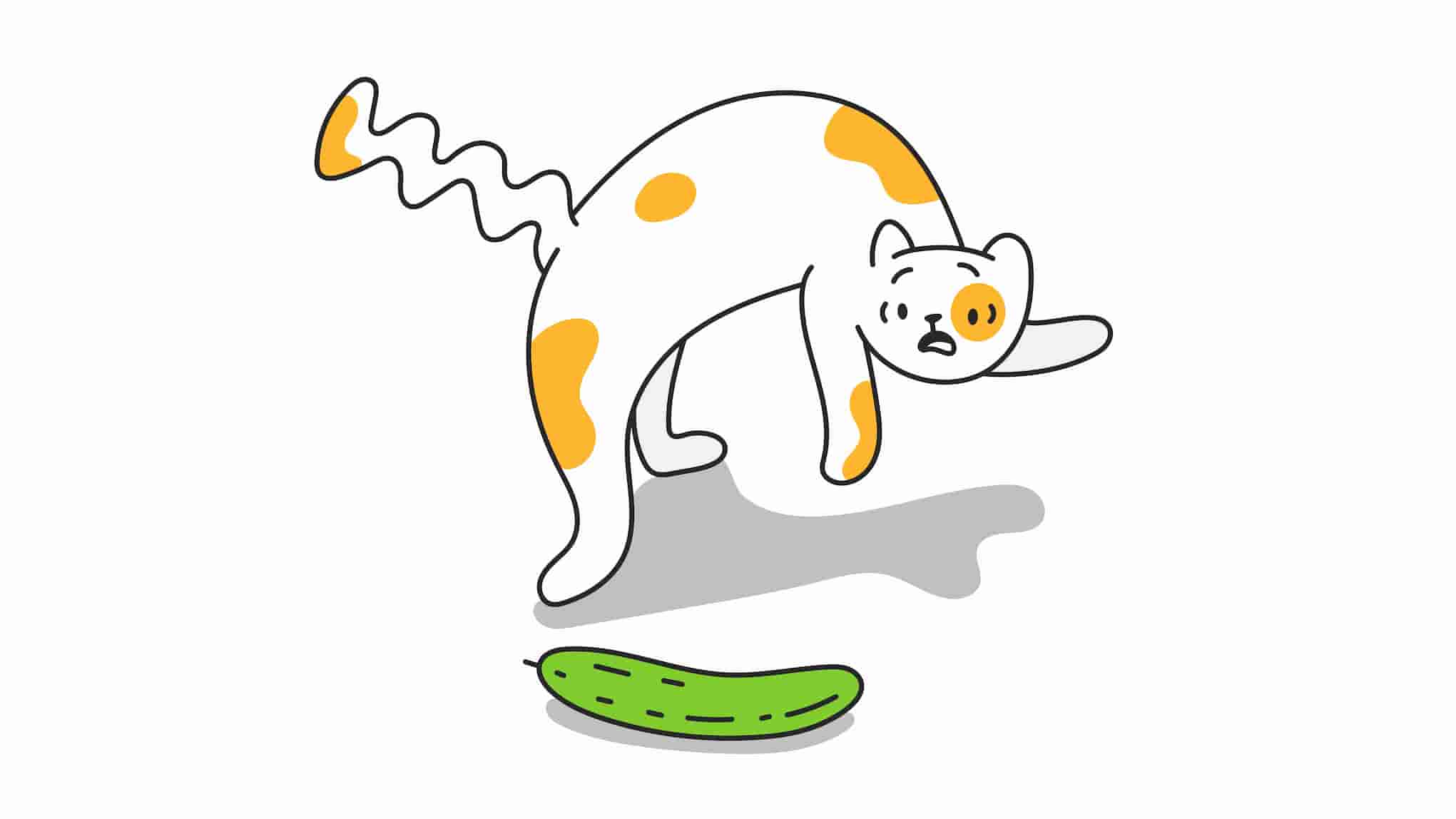