Petfeed / Care / How to Discipline a Puppy Without Punishment

How to Discipline a Puppy Without Punishment

Puppies are cute. Your new puppy is, obviously, the cutest.

But you know what’s not cute?

Is your puppy a perfect angel as long as you are in plain sight, but the devil in them comes out when you’re not around? Well, thanks to Petcube pet cam, you can keep an eye on them, even after you leave the room.

Maybe you thought discipline was just for kids, but it turns out that if you want a canine companion you can live with, you’ll have to put your (Puppy) Parent Hat on and learn how to discipline your dog.

But before you start, take some time to make sure you’re taking the best approach. Once you have learned the basics of doggie discipline, you’re ready to start curbing those bad puppy behaviors like a pro! 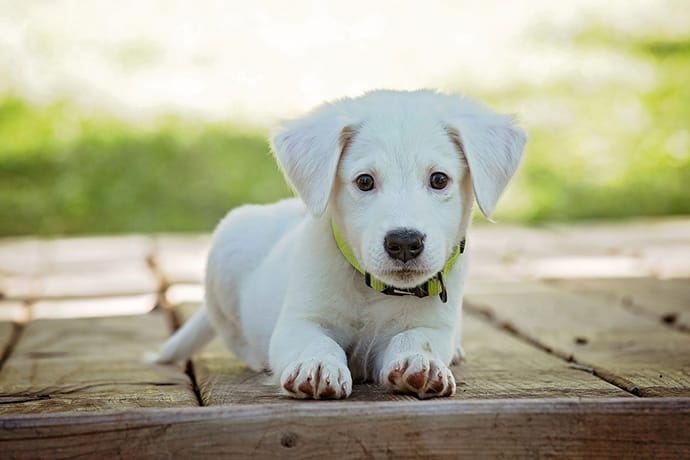 If you feel like your puppy problems have you at the end of your leash, you’re not alone! Luckily, these behaviors can easily be curbed if you correctly reward and punish your puppy. Later on, we’ll address some of the top issues in detail, but first, let’s start with an overview of basic puppy discipline do’s and don’ts.

5 Steps to Discipline a Puppy without Punishment

If Skip is punished for barking at the neighbors on Tuesday but on Wednesday you decide to let it slide, he’s going to be confused and won’t learn the desired behavior. Giving in to him "just this once" will reinforce the negative behavior, leading to a puppy problem continuing into a dog problem (and staying your problem).

Only punish a behavior if you catch your puppy in the act. A bad puppy that has chewed through the screen door won’t understand that he is being punished for this when you reprimand him ten minutes later. You can monitor your puppy remotely by using Petcube, a pet camera that will broadcast your voice if you catch him at that screen door.

A firm "no" from you signals to your puppy that his behavior is not ok, but yelling or physical aggression from you will just make him afraid of you. Dogs don’t understand that these responses are directed towards a behavior, and instead interpret them as threats to themselves. A good puppy parent and trainer should signal authority without losing his or her cool.

Equally important as punishing bad puppy behavior is rewarding the good. Did Dixie stop barking when you told her to stop? Go Dixie! Give her a treat. Did Duke go potty outside? That’s awesome! Tell him what a good boy he is.

Turns out that timeouts don’t just work for naughty kids! Naughty puppies can also learn from timeouts, or “isolation”. Timeouts are most effective when used in response to behaviors like pestering other dogs, nipping, or chewing.

Pro tip: The best way to discipline your dog with timeouts is to give her some kind of verbal signal that you can say gently, (for example, “Oops!”) and then either leave the room (if you are alone) or lead her to an area where she will be separated from other people and dogs. Crates can also be effective timeout spaces. Ideally, a timeout should not last longer than a couple minutes. 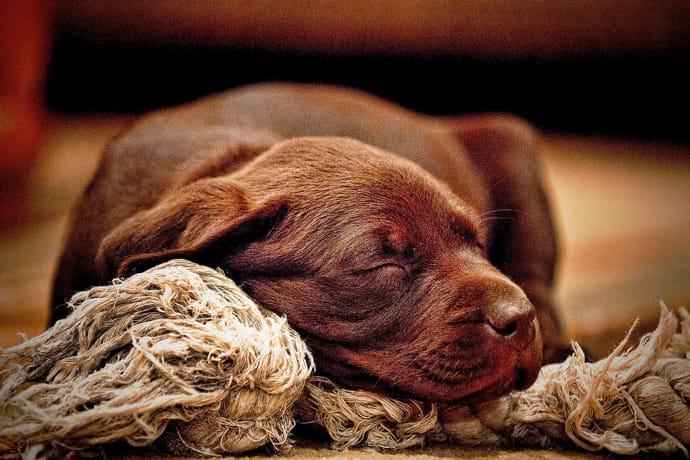 Although this was encouraged in the past as a way to teach a dog who the “leader of the pack” is, it is not the most effective training tool. Using aggression teaches aggression, and while a smack on the nose or a Scruff Shake might cause Rover to stop a problem behavior, too much of this type of punishment just might turn him from a naughty puppy into a seriously bad dog.

Furthermore, experts are beginning to discourage the use of positive punishments such as collar jerks and electrical fences because of the failure of these methods to bring about long-term behavioral change.

Don’t stare down, drag, or hold down your puppy

Behavior meant to threaten will teach your dog to fear or challenge you, and physical manipulation prompts her to defend herself. Neither path produces the outcome you desire, and even if these methods bring your puppy to submissiveness now, they could lead to pent-up aggression which can manifest itself later.

How do you scold your puppy? Puppies learn from the signals we give them, so if our tone of voice seems overly anxious or out of control, they will in turn become anxious and hyperactive. It seems logical that your puppy would be more attentive to your commands if they are loud or angry, but dog trainers recommend using a calm, but firm, tone instead.

Jumping on or nibbling people, barking inappropriately, peeing or pooping indoors, and chewing on furniture or other household objects are just a few of the puppy problems you’re familiar with as a puppy parent (or can expect to be). This is one part of puppy parenting that can easily be more frustrating than fun. Here are a few of the most common problems experienced by new puppy parents like you, and what to do about them:

Barking, whining, and other forms of vocalization are natural for dogs, and especially for puppies. However, excessive barking is both annoying and inappropriate. Like toddlers, dogs vocalize to communicate a variety of messages. When addressing vocalization, consider first the likely reason, and then choose your response accordingly.

Puppies may vocalize to express boredom, excitement, anxiety, to get attention, to sound a warning, or as a response to other dogs. Depending on the cause, either a firm reprimand ("No.") or withholding attention is the most effective approach for stopping puppy barking. If boredom is consistently the cause, consider investing in a pet camera with treat dispenser to entertain your new pal remotely when life’s demands keep you away.

Nipping and biting is often not intended to be aggressive. More often than not, puppies use their mouths as a tool with which to explore their world, but if this goes unchecked, your puppy could learn some dangerous behaviors.

As a pet parent, you should never respond to nipping by jerking your hand away, as this encourages the puppy to continue the "game". Instead, respond by clearly saying "ouch", and gently removing his mouth from your hand.

Like barking, chewing is a natural behavior for dogs. The problem comes when they’re chewing things they shouldn’t be. In puppies, this is usually due to teething or curiosity, while boredom or anxiety can prompt dogs to chew at any stage of life. 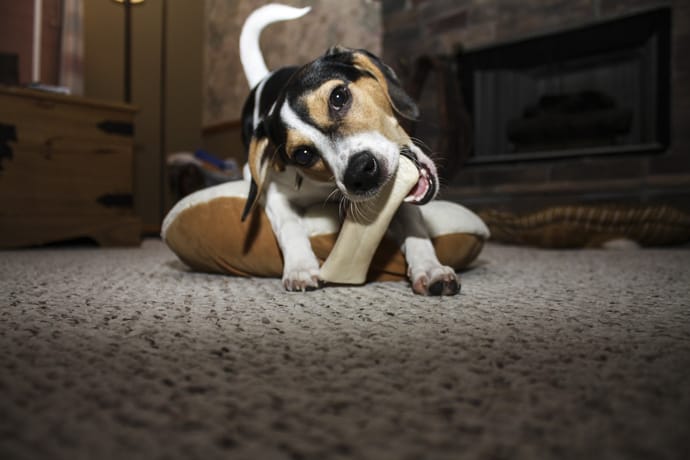 Regardless of the reason, you probably want to know how to get your dog to stop chewing everything in sight. The best solution is to first signal to your puppy through a firm command that her behavior is not appropriate, and then to give her something nice to chew on instead of your sofa—a bone or chew toy ought to do the trick.

Aw, your dog misses you—that’s sweet! Until you come home to find your furniture clawed and the neighbors complaining because he barked all day. If your dog becomes a "bad puppy" while you are gone, it could be due to separation anxiety. If this is the case, the dog will display signs of anxiety as you prepare to leave, and will typically start acting up 15-45 minutes after your departure.

The good news is that this behavior usually decreases naturally as your new puppy starts to understand that you will always come back. In the meantime, tools like interactive pet cameras, such as Petcube, or crates can ensure that your furry friend stays out of trouble while you’re gone.

Or, in layman’s terms, "going potty in the house". Of all the hurdles of puppy training, this is definitely the smelliest — and probably the one you’re most eager to overcome. The good news is that housebreaking your puppy can be quite easily done, but it does require some discipline on your part.

The first step is to establish a routine for your puppy of when he eats and when he goes outside. The canine digestive system is pretty regular, so you can expect that your puppy will need to relieve himself within 5-30 minutes of eating. Setting and sticking to other "potty" routines (for example, first thing every morning) will help your puppy learn to take it outside.

Until your puppy is totally housebroken, it’s suitable to use "cratebreaking" as a halfway step while you’re out of the house. If your puppy understands that her crate is her “den”, she’s unlikely to soil this space, and so keeping your puppy in a crate while you’re away from home is a great way to avoid any stinky surprises when you return.

During the housebreaking process, it’s important to reward good behavior with treats or praise, while avoiding displays of frustration or punishment for accidents. If your puppy has already pooped or peed in the house, she won’t understand that you are punishing her for this behavior by the time you find it. However, if you catch her squatting in the house, you can forestall the action by distracting her with exclamations (“Aha!”) long enough to take her outside. You can even bust the puppy remotely through Petcube if you are paying attention.

If your puppy consistently urinates or defecates in the house after a few weeks of housebreaking, she should be examined by a veterinarian to check that there isn’t an underlying health issue.

Puppies can be a handful, but with proper discipline, your new furball can learn habits to keep you both happy and safe. Pet cams like Petcube make training even easier, allowing you to reinforce positive behaviors and preempt negative ones with the ability to interact remotely with your pet, keeping it entertained and out of trouble. Even better, you can now reward your pup for good behavior with the remote Petcube Bites. Good luck, and happy training!

Did your dog ruin your favorite shoes again? Worry not, there is a simple way to get your dog to stop chewing everything! »

Disciplining your dog doesn’t have to be cruel and punishing. Learn how to correct your dog’s behavior with these humane methods and techniques! »

Learning how to stop a dog from barking doesn’t have to be a strenuous process. Take a look at some effective tips to stop your barking dog from driving you crazy! »