Petfeed / Care / Different Dog Sounds and What They Mean

Different Dog Sounds and What They Mean

Have you ever heard a dog bark and wonder what it means? Or have you gotten near a dog and had it start to growl or whimper? These sounds can convey important meaning and the better you can get at discerning them, the better you’ll understand your four-legged companion.

How Do Dogs Speak? 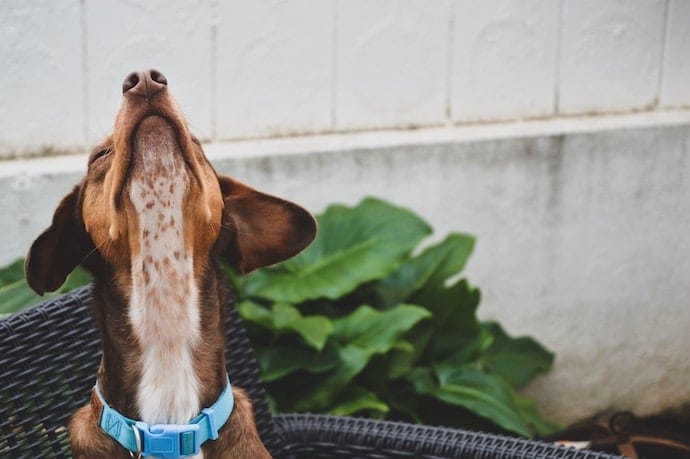 Dogs talk to us, just in a different language. In fact, they do it every single day, through different dog sounds.

There are three aspects of the sound a dog makes that can indicate meaning:

Differences in these can give clues about whether a dog is happy, sad, or something else entirely.

Here are some of the different sounds dogs can make and what they might mean.

Barking is one of the most common dog vocalizations that you will hear. It’s one that can indicate anything from happiness to fear, anger, or even frustration. It can be a very contextual noise.

Dog barking can mean the following:

If you hear 2-4 of these at the same time, it’s an instinctual call and means “alert the pack.”

Howling is another popular form of communication. It’s used in many cases to announce presence.

However, dog howling can also be a sign that you should be concerned about a bigger issue, including:

Your dog might howl in response to a sound they hear. If that’s the case though, they should stop when the original sound stops, but if not, you can use desensitization and counterconditioning to help your dog stay quiet.

If your dog is doing this for attention, there are two things you as an owner should do:

Growling is one of the primary angry dog noises you hear. It can mean one of two things:

Look to your dog’s body language to understand whether you should give them space or encourage them.

This is another common noise. Usually, it means your dog:

However, it can also point to serious issues as well, including:

If you hear a dog yelp, chances are it means they’re in pain. Treat any injuries that are present, and get help from a licensed vet if needed.

Whining is also a sign of submission in dogs, and it can be accompanied by the following signs:

If you hear your dog whine, you can acknowledge it. You might hear this after your dog does something they shouldn’t do.

Dog whining can be both innocuous, or it could mean something is wrong, so watch their body language to tell if you should be concerned.

Dog coughing can mean many things, ranging from nothing to something serious. Remember, dogs use their noses to explore, and sometimes they get particles up their nose that their body doesn’t agree with, causing them to cough. This is usually a singular, quick occurrence though, and watch for any recurring issues.

You should also raise the alarm if your dog’s cough sounds like any of the following:

Kennel cough is a contagious respiratory disease that your dog can get, especially when they’ve been to a place recently with other dogs. It’s treatable, but is more severe the younger the dog is. Kennel cough is often a very strong cough that has a distinct honking sound to it. It could also indicate tracheal damage, which is common in obese and toy breeds.

If you hear a dog hacking, and if you say to yourself “my dog sounds like he has a hairball,” it could be a sign of airway irritation or even a blockage. It could mean your dog has a sore throat, tonsillitis, an infection or a foreign object lodged in there.

If the cough has phlegm to it, and it sounds like your dog is gargling, it can be a sign of fluid in the lungs. If breathing sounds labored too, it could be a sign of pneumonia. If that’s the case, you should call your vet.

Not every dog sound means something bad. In fact, there are lots of other great sounds too and you might wonder what it means if you hear your dog making weird noises.

Dog “laughing” is a bit different, since it doesn’t always sound like human laughter. It often involves your dog opening their mouth, with their tongue sticking out and jaws stretched wide open. It can sound like panting and Nobel prize-winning psychologist Konrad Lorenz identified this as a form of “laughter.”

You can make your dog laugh as well, by doing this:

Your dog may react to this, understand it and respond in various ways.

Did you know dogs can purr too? Well, it’s not like a cat purr; it’s more of a rumbling sound, like a motor boat. It’s similar in a sense to a growl, and most dog trainers call this a “rumble” sound.

It can mean two things normally, and they are:

Dog purrs can sound like cat purrs, but often you can determine the difference based on two things:

Typically, the three areas that you can look at to best determine a dog’s emotions are:

Dogs’ body language typically shows their true feeling, even if their noises seem to indicate something different. Generally when their tail is up and away from their body, it means aggressiveness, but if it’s relaxed, it can mean your dog is calm. However, there are some dogs like Siberian huskies that have naturally curling tails, and they always seem dominant. Some dogs even carry their tail between their legs, whether or not they’re submissive.

As an owner, you need to learn the correct signals for your dog:

Understanding your dog’s body language will help you build a better connection to them and prevent problems.

Most of the time, puppies can make different sounds than more mature dogs, including:

The sounds can be virtually the same as more senior dogs. Grunts can mean happiness and warmth, and yips and yaps can be their barking sound until they get older and the pitch lowers.

The Most Vocal Breeds

So, what are the most vocal breeds? Many think it’s only small dogs that are loud, but that’s not the case. Some larger breeds can also be quite vocal.

Some of the most vocal breeds include the following:

There are many more breeds that can be vocal, but with proper training and correction, they can learn to be quiet.

Dogs have their own body language, which as noted above can tell you important things about your pup. It’s important to understand them so you can tell whether your dog is barking because it’s scared, happy to see you, or nervous. This can tell you also if your dog is about to snap at somebody.

To decipher your dog’s body language, start by looking at their:

You can also tell how your dog is feeling by their hair. Yes, dogs can have goose bumps just like humans when they’re aroused or upset along the shoulder, spine and tail area.

Hackles are often seen as indicators of aggression, but that’s not always the case.

Also, if a dog is stressed, they might shed more.

Dog sweating is a sign of stress in some cases as well, and if you see visible footprints, it can indicate they are upset.

When looking at your dog’s movement, notice if they are stiff or moving slowly, which can indicate a problem. If their body is relaxed, they might be happy, but if their tail is between their legs, they might be scared of something.

There are even charts that indicate what your dog may be feeling based on body language. There are actually many more body language indicators you can use, but understanding these can make a world of difference.

How to Listen to Your Dog While Not at Home

The best way to listen to your dog when you’re not at home is to invest in a Petcube pet camera. With this device, you can connect to a live video feed that lets you:

Petcube pet cameras is a great way to watch your dog’s reactions, and if you notice that something is amiss, you can react right away. If you notice your dog is doing something they shouldn’t, such as barking at the mailman, you can correct this. It allows you to stay connected to your pet when you’re not at home.

Body language and sound are important to understand, to ensure your dog gets what they really need or that you help them in the right way. Figuring out why they’re making certain sounds and the meaning behind them ensures you’ll be the best pet owner you can be.

About the author: Danni Peck is a writer, marketing agent and voice actress. She's had pets all her life.

Care
03 December, 2018 —
Your Essential Guide to Understanding Depression in Dogs

If your dog was ‘down’ would you recognize the signs of depression in dogs? Discover how to tell if your dog is depressed and get that tail wagging again. »

Studies have shown that dogs have similar emotions as humans, and they understand us through gestures and emotional expressions rather than words. »

Is your dog a whiner? Have you ever wondered why your dog keeps whining? Read our guide to find out the reasons and solutions to stop your dog from whining. »