Petfeed / Care / Why Do Dogs Whine and How To Stop It

Why Do Dogs Whine and How To Stop It 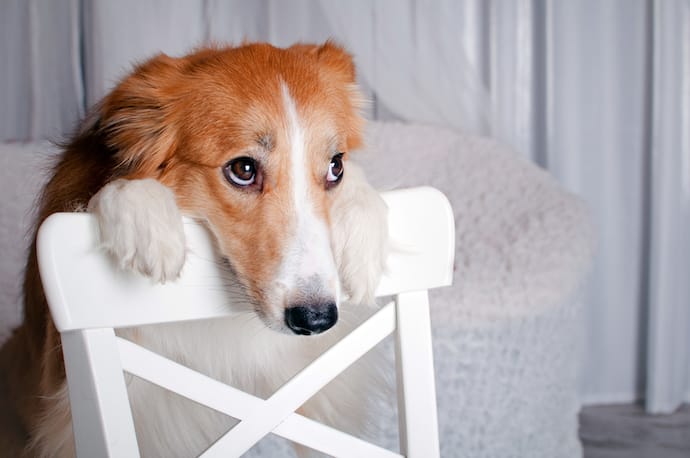 Is your dog a whiner? Have you ever wondered why your dog keeps whining?

It seems like dogs who whine a lot are often trying to tell their owners something. Unlike us humans, dogs can’t use language to communicate with us.

So, whining and the occasional mutters, squeals, and barks seem to be how our pets talk to us. But, sometimes it can be a sign of other disorders and conditions.

It’s important to remember that whining, whimpering and doggie mutterings are all normal behaviors.

If we look at the social structure of dogs, we will notice that puppies often use these high pitched cries as a means of communication to their mothers. However, whining can be both a natural and nurtured behavior.

If you’re a pet owner struggling to understand why your dog is whining, then this article is perfect for you! Here we’ll cover:

Why Is My Dog Whining?

Dogs have long been our companions for thousands of years.

From an evolutionary standpoint, dogs have adapted to understanding human gestures and specific phrases.

Sometimes they may vocalize in different pitches and tempos for us to better understand their needs.

Dogs have evolved in such a way that they are now quite capable of manipulating us!

In fact, studies have shown that dogs often use a classic "guilty dog, doe-eyed" look to get away with naughty behavior. This is a language form of communication.

This means that dogs know exactly how they can grab our attention. Not only do they use their body language, but have developed distinctive whining, yelping, and crying techniques to seek attention.

A Doggie in Pain or Fear

Veterinarians know that a whining dog, who may consistently cry may be in chronic pain.

Some examples of chronic pain include:

It's important to remember that whining and crying can be associated with secondary clinical signs. Dogs who are fearful of a particular situation may whine as a way to warn their owners.

Whining and whimpering can also be a sign of boredom or excitement. It's important to take the entire situation into account, so you understand why your dog is whining.

Boredom
A bored dog may not only whine but may also show evidence of destructive behavior such as digging holes, going through garbage or chewing household items.

Excitement
An excited dog will whine, bark and will seem a lot more active and playful. Dogs who tend to whine when excited are high-energy dogs.

How Mental Illness May Cause Whining

Mental illness is a psychological disorder that results in an inability to function normally. It involves conditions such as anxiety, PTSD, depression, dementia, and obsessive-compulsive disorder.

Unfortunately, even our canine friends can succumb to various forms of mental illness.

A Sad pup! Depression in Dogs

Depression in dogs is a poorly understood mental illness. This is because unlike humans we cannot ask our dogs what's wrong! As such, an animal behaviorist relies on a dog's behavior, vocalization & body language to diagnose depression. 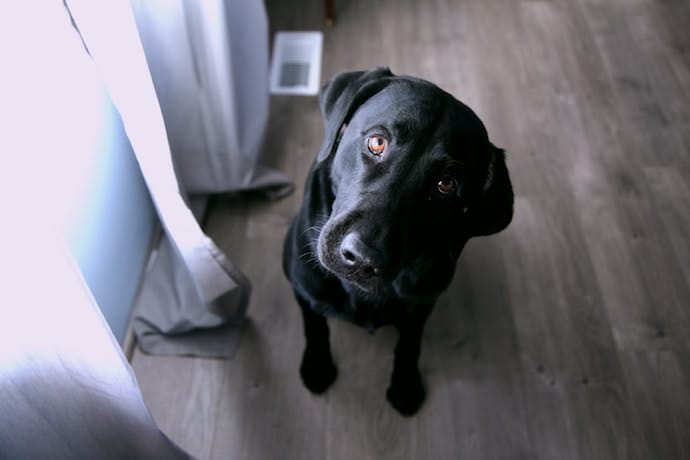 The are many reasons why a dog may be depressed, some of these include:

Dogs with depression may show symptoms such as:

A Fearful Pooch! PTSD in Dogs

Post Traumatic Stress Disorder is known as a psychological illness that affects people. But did you know even your pooch can experience C-PTSD?

PTSD is not a result of chemical imbalances in your dog's brain. Rather, it occurs as a result of dogs recalling unpleasant memories. For example, PTSD may be most common in dogs that have suffered through:

The Edgy Pooch! Anxiety in Dogs

Anxious dogs tend to whine on a regular basis if they have been placed in an uncomfortable situation.

Anxiety in dogs can come in various forms. Yet, it seems like separation anxiety may be most common as it affects 20-40% of dogs in the United States. But dogs can also experience social, traumatic and noise anxiety.

Social anxiety often occurs when dogs have not learned how to socialize with other pets & humans. As a result, they may become more fearful and cautious when encountering new people or pets.

A classic example of noise anxiety would be dogs who hide or whine when they hear fireworks. Now, noise anxiety doesn't mean that fireworks are the reason for your dog's anxious behavior. In fact, dogs can become fearful of noises such as thunderstorms, cars and even children crying.

Traumatic anxiety goes hand-in-hand with PTSD. For example, if you have recently rescued an abused or neglected dog, then there might be a few triggers that can set them off. This can be the sight or sound of a discomforting object. For example, a dog raised in a puppy mill may not whine or yelp if placed in a crate.

Senior Dogs! A Case of Dementia In Dogs

If your dog whines a lot and happens to be a senior (above the age of 8 years old), then chances are dementia can play a significant role in whining.

When it comes to dementia in dogs, an anxious pooch who is not in the right mindset will whine on a regular basis.

Have you ever seen those adorable videos of huskies talking to their owners?

It seems like certain dog breeds may be more vocal than others. We don't know why this occurs. Animal behaviorists suspect that vocalization may be linked to your dog's ancestry and original purpose.

For example, small dogs often tend to whine a lot more than other dogs because they were bred to be watchdogs. The main job of a watchdog was to warn their owners when an intruder was near.

On the other hand, dogs like the husky were pack animals. So, the high pitched howling and whining is a form of pack communication.

Are you curious to know if your dog belongs to one of the top 10 vocal dog breeds?

How Do I Stop My Dog From Whining?

Whining and whimpering can also be a sign of boredom or excitement. It's important to take the entire situation into account so you understand why your dog is whining. 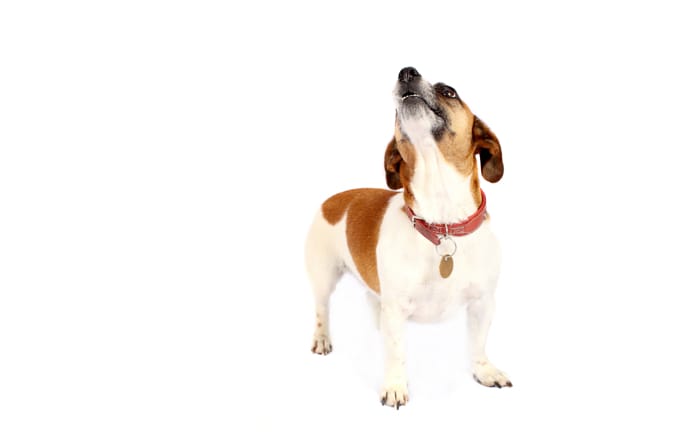 Step 1. Find Out The Real Cause of Your Dog’s Whining

You will not get anywhere with training if you don't understand what's causing your dog to whine. Ask yourself:

Remember, you should never punish your dog for whining. This is because sometimes your dog may whine out of fear or boredom., which is not their fault!

Step 2. Adjust Your Training Tactics To The Cause

The Attention Seeker
Dogs who whine for the sake of attention have often learned that they can get away with this behavior. If you have an attention seeking dog, then try ignoring their whining.

For example, if your dog starts whining while you're working, don't yell! Avoid petting them and don't acknowledge their presence.

Once they’re done whining, you can reward this behavior by petting them or giving them a treat.

The Anxious Dog
A dog who whines because they are anxious may need weeks to months of consistent training. In this is your case, your job is to find out what makes your dog anxious & desensitize them to it.

For example, to combat separation anxiety, owners can do things like keeping the radio turned on when they leave to ease their dog's mind.

Some dog trainers recommend that you allow your dog to partake in activities that boost their confidence. This can include agility training, endurance courses and obedience training.

Step 3. Use Medication Or Calming Aids

If you've got an anxious or fearful dog, you can look into purchasing natural relaxants.

These days there are many different pet relaxants available in-store or online. The most popular ones are dog pheromone-based products.

Most of these products claim that the product was designed based on the pheromones of a nursing dog. This is because a nursing dog releases pheromones that naturally calm her puppies down.

The same can be true for adult dogs too! The belief is that any adult dog will instinctually be able to recognize and respond to the pheromone.

Sometimes dealing with anxious dogs may be difficult when you're away from the comfort of your home. Petcube Bites treat camera is a pawesome way to comfort your anxious dog when they’re not with you.

With Petcube Bites, you can keep an eye on your dog to see if they’re getting a little destructive. If they begin whining, you can talk via the cam’s 2-way audio or give them treats when they stop whining.

If you've got a bored pup, you can also mentally stimulate them via Petcube Bites by asking them to do tricks for a reward.

How Do You Stop your Dog From Crying When You Leave?

Our article on separation anxiety covers everything you need to know about treating this behavior. You can read about it here: Separation Anxiety In Dogs: The Definitive Guide

Here’s a quick brief as to how you can stop your dog from crying before you leave!

If you're trying to stop your dog from whining, you must first try to understand why they are whining in the first place.

Whining, whimpering & crying are all natural behaviors for a dog. But, sometimes it may be a sign of other problems such as mental illness, pain or disease.

Why Do Dogs Cry At Night?
Pet owners should understand that whining and whimpering are normal behaviors but, they can be learned as well.

Dogs that cry or whine at night may be seeking your attention. Unlike children, dogs aren't afraid or scared of the dark. But, they may be afraid of sleeping by themselves.

Think about it! Dogs are social creatures and so sleeping with their pack is instinctual. When you first get a puppy, they may whine and cry because it might be the first time they’re away from their mother and littermates.

Ideally, you should allow your puppy sleep in the same room as you for the first few days or weeks of their stay. Eventually, you can condition them to sleep alone.

Why is My Dog Whining While Being in a Crate?
There may be many reasons why your dog is whining when put in a crate. Two plausible explanations for this behavior include boredom and attention seeking.

Why is My Dog Whining for No Reason?
Dogs will not whine for no reason. There's almost always a reason for your dog’s whining, but for the most part, you should interpret excessive whining as a form of communication.

Huskies are a classic example! They yap, howl, whine, cry and almost seem like they are trying to talk to you.

Care
03 December, 2018 —
Your Essential Guide to Understanding Depression in Dogs

If your dog was ‘down’ would you recognize the signs of depression in dogs? Discover how to tell if your dog is depressed and get that tail wagging again. »

Dog sounds can convey important meaning and the better you can get at discerning them, the better you’ll understand your four-legged companion. »

Studies have shown that dogs have similar emotions as humans, and they understand us through gestures and emotional expressions rather than words. »